Artifacts and works of art

The total of our collections is estimated at more than 17,000 objects.

The objects in the collections are not all on permanent display. They are mostly kept in storage rooms and are occasionally brought out to refurbish the permanent exhibit or to create thematic exhibits.

The collections can be divided into three broad categories: textiles and costumes, various artefacts from local heritage and visual art, divided as follows:

7500
from
local heritage HERE ARE A FEW ARTEFACTS

9000
Textiles
and apparels HERE ARE A FEW OF THEM

Donation of the month

Each month we will present an object that has been generously donated to the Museum. 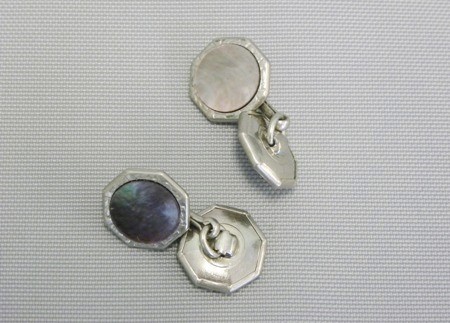 Father's Day is celebrated worldwide to recognize the contribution that fathers and father figures make to the lives of their children. This day celebrates fatherhood and male parenting. Although it is celebrated on a variety of dates worldwide, many countries observe this day on the third Sunday in June.

What can we offer our father for that special day?
Some cufflinks?
And who invented The Cufflink?
Around the 13th century, shirt cuffs were held together by ribbons, ties and strings. As men’s shirts and fashions changed, so did their cuffs and in the 17th century early forms of the cufflinks we know today emerged. The stitched buttonhole was developed and tailors fastened these cuffs with two ornamental buttons attached by a chain. Named by French tailors as “boutons de manchettes”, or sleeve buttons, they became popular with the upper classes.

The Beaulne Museum's documentation center includes numerous archives and documents that can provide information on places, organizations and important people from the city of Coaticook. There are also several books, periodicals and newspapers providing information on various subjects, such as the history of the region, fashion and costume, textile and visual arts.

The documentation center is open to the public by appointment only, please contact us.